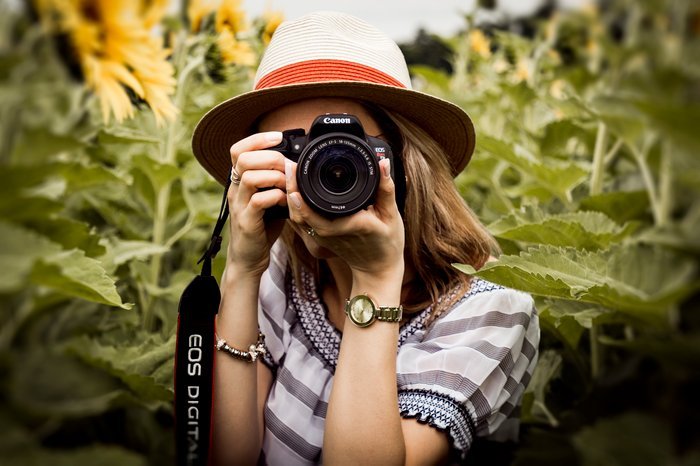 Perspective rendering and fields in photography

In photography the perspective rendering, that is the reproduction of the distance between the planes, which can be amplified, normal or compressed, is determined by the shooting distance.

If both photos had been taken using a Full Frame sensor, again without changing the shooting distance, and had cropped the central part of the image made at 50mm to reproduce the picture obtained at 100mm, the same result would have been obtained. over it.

As expected, the two images differ only as regards the depth of field, which in the image taken at 100mm is more contained. Compared to larger sensors, smaller sensors only cut out a central portion of the image projected by the lens; this is where the expression crop factor comes from.

It is therefore logical that if you take two photos with the same lens and at the same distance from the subject, using first a larger sensor and then a smaller sensor, you will get two images with different angles of field but with the same perspective rendering and the same depth of field because the two images thus obtained are essentially each other’s clipping.

Now let’s keep the field of view constant. To get the same picture with both 50 and 100mm we are forced to work at different distances. To change this time is therefore the perspective rendering, more compressed in the image taken at 100mm because taken at a greater distance from the subject. However, the depth of field does not change.

At this point it is evident that angle of view, perspective yield and depth of field are not absolute characteristics of the lens but depend on the size of the sensor in use, the distance from the subject and the working aperture.

The only characteristics of a lens are the coverage circle, which determines which format the lens is able to cover with its projection, the focal length, i.e. the distance between the plane of focus and the optical center of the lens, and brightness, which is determined by the diameter of the entrance pupil of the objective.

The entrance pupil is the optical center of the lens, it is the point where the light rays captured by the front lens are made to converge. The larger the entrance pupil, the shorter the depth of field.

In photographic lenses. such as DZO lenses, brightness is expressed in f numbers. These numbers are quotients, they indicate the ratio between the focal length and the diameter of the entrance pupil of a lens. A 50mm f / 2 therefore has an entrance pupil of 50mm / 2, or 25mm. It is for this reason that telephoto lenses are said to develop a smaller depth of field than wide angles, because for the same number f they have a larger entrance pupil. A 100mm f / 2, for example, has a 50mm entrance pupil, twice that of a 50/2.

It can therefore be established that:

Why then is it said that a wide angle lens enhances the distance between planes and has a wide depth of field while a telephoto lens is said to compress the planes and have a shallow depth of field? Because considering their use on the same format, due to their angle of view and their brightness, the way in which these focal lengths are usually used produces the commonly declared effect. However, it is easy to see how the perspective rendering and depth of field of a lens change drastically according to the distance from the subject, demonstrating how relative these two parameters are.

The distance between the planes perceived with the naked eye is reproducible from a focal length equal to the diagonal of the format in use. In the case of the Full Frame, whose dimensions are 24x36mm, the normal focal length is therefore 43.27mm.

On any format, the lens with the normal focal length produces an angle of view of approximately 53 ° and is itself called normal.

In the photographic field and in relation to Full Frame sensors, however, it is the 50mm that is usually referred to as normal. This habit dates back to the beginning of the last century and I can only speculate how it came about. The 50 was the standard lens combined with the cameras because it was simple to design and cheap to make, even if it had a good level of brightness and optical quality. Furthermore, on Full Frame the 50 covers a rather versatile angle of view and therefore represented an excellent all-rounder in a time when zooms did not yet exist. For these reasons, since the dawn of photography, the 50 has taken the place of the 43mm, a focal length rarely produced (there is a Pentax FA 43 / 1.9) because it is too similar to the widespread 50mm.

The diaphragm and diffraction

Closing the diaphragm excludes from the formation of the image the light beams that cross the front lens in the more peripheral areas and which would therefore reach the focal plane in a more angled way, creating comet-shaped signs on it instead of points well defined. This results in an increase in the sharp area on the image, i.e. the depth of field, as well as an increase in the optical correction of the lens, especially at the edges of its projection.

Closing the diaphragm beyond a certain limit, however, causes a lowering of the general sharpness as it forces the light beams to pass through a hole so small as to cause excessive diffraction; for this reason it is a good idea to exceed f / 11 only for macro applications with specific lenses. Most lenses reach their qualitative peak when the aperture is closed 2-3 stops.

The circle of confusion and depth of field

The size of the circles of confusion (also called circles of confusion ) is the maximum size that a point out of focus can have to still be perceived by the observer as a point and therefore in focus. This dimension varies based on several factors, including the observer himself. This makes it impossible to objectively establish what the depth of field of an image is. By convention, following tests carried out on a sample of observers, it was established that on a 20x25cm print observed at a distance equal to its diagonal, i.e. 32cm, the diameter of the circles of confusion corresponds to 0.25mm. Beyond this measurement the points are perceived as discs rather than points and the image they form appears out of focus.

Based on these results, adapted to the acquisition system, the reproduction medium and the observation distance in play, all calculations relating to depth of field are performed. These calculations produce results that most people find very optimistic; for this reason these results are often adjusted downwards considering the actual depth of field much more limited than what mathematically suggested. Generally, the values ​​are scaled by 1-2 stops. To give an example, if you need 30 cm of depth of field and this value, according to mathematical calculations, is obtained at f / 5.6, it is considered necessary to turn between f / 8 and f / 11.

From a physical point of view, since a lens can focus a beam of light on only one plane at a time, the area that is truly in focus in an image cannot be extended in terms of depth.